Attendees Partner to Bring One Health to K-12 Classrooms

Veterinarian Deborah Thomson and research scientist Tammy Nicastro met at the 2018 One Health Symposium, which led to the two co-teaching a One Health curriculum to K-12 students in the San Francisco Bay Area. (courtesy)

On November 2, the 6th annual UC Davis One Health Symposium will bring together veterinarians, physicians, public health officials and scientists at the UC Davis School of Medicine in Sacramento to explore current issues impacting the health of animals, people, plants and the environment. This year’s theme, “Interfaces: One Health at Borders and Margins,” puts a spotlight on health at the urban-rural,  political and cultural interfaces, as well as across U.S.-Mexico and cultural borders.

Hosted by the School of Veterinary Medicine’s One Health Institute and Students for One Health with the School of Medicine and its One Health Student Interest Group, the daylong symposium will feature expert panels, roundtable discussions, networking and student research.

Symposium attendees draw inspiration not only from the panelists, roundtable discussions and student research posters, but also from one another. At last year’s event, a chance meeting between a veterinarian and a research scientist in women’s health sparked a unique partnership that helped bring One Health into the classrooms of underserved elementary students in the San Francisco Bay Area.

Dr. Deborah Thomson, a full-time clinician and small animal veterinarian in Albany, had the day off and decided to attend the 2018 Symposium, hosted at the School of Veterinary Medicine. Originally from the East Coast, Thomson has a background in international veterinary medicine and completed One Health research projects in Tanzania and Nepal.

“I’ve been fascinated with One Health for a long time,” said Thomson. “At the time of the conference, I was already making lesson plans in One Health for children in K-12 classrooms.” 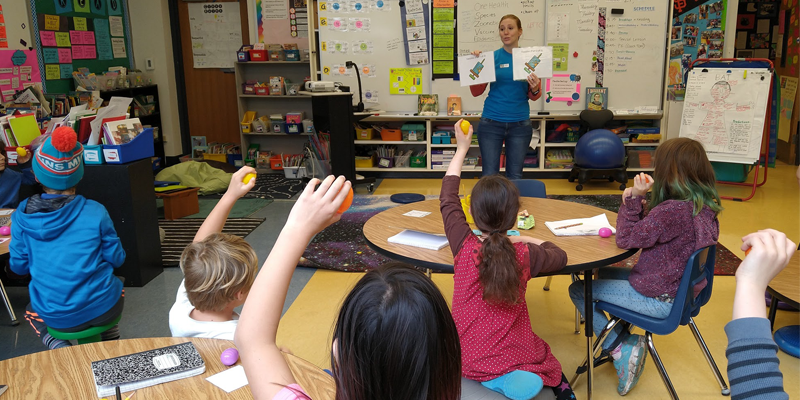 Thomson started up a conversation with the attendee sitting next to her, Tammy Nicastro, a research scientist with the UCSF National Center of Excellence in Women’s Health and project lead, UC Climate Change and Health Curriculum Initiative. Nicastro was presenting a poster on her research in Kenya evaluating the impacts of an agricultural livelihood intervention on HIV health (UC Davis faculty and alumnae Drs. Kate Scow and Lauren Pincus are also involved in the study).

Nicastro and Thomson quickly learned they both lived and worked in the San Francisco area. Thomson explained how she was creating lesson plans in One Health and teaching them through the UC Berkeley Bay Area Scientists in Schools program (BASIS), which places scientist volunteers in underserved public schools to present on topics they are passionate about.

She mentioned that a classroom needed two volunteers for a 3rd grade lesson, and suggested they teach together.

“Tammy’s values were in line with mine, and I thought she would be very helpful at sharing One Health at a grassroots level,” said Thomson. “It’s wonderful to have a comrade in the classroom from human health.”

Nicastro agreed to team up and they have since taught several lessons together in the East Bay.

“Deborah had already created an incredible One Health lesson for 3rd graders and taught me how to work with her to deliver it,” said Nicastro.  “We’ve had the best time teaching kids about One Health and seeing their enthusiasm to learn.”

Starting a One Health Movement in Kids

To make One Health accessible to eight-year-olds, Thomson and Nicastro used a mix of auditory and visual tools, including Venn diagrams and videos. They also applied different teaching techniques, with an emphasis on hands-on activities, collaboration and fun. Students participated in an egg hunt that models an epidemic outbreak and then break into groups, role playing as veterinarians, physicians and environmental health scientists attempting to stop it. 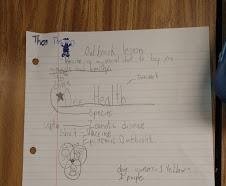 A student’s notes from a lesson about outbreaks. (courtesy)

Thomson, who taught in a middle school before attending veterinary school, has also brought her curriculum to STEM and science summer camps. She is always thrilled by how quickly kids pick up the concepts.

“We can see by the end of the lesson that they know about One Health, epidemics, what a species is, zoonotic disease and the importance of vaccines,” said Thomson. “Popping into the class as scientist role models and then providing resources for teachers to continue afterward—this is the right way to start a movement in kids.”

From Classroom to Congressional Fellow

Nicastro felt so strongly about Thomson’s work that she wrote her a letter of recommendation for the 2019-20 AVMA Congressional Fellowship Program. Highly competitive, the fellowship was awarded to a single applicant this year. Fellows spend a year in Washington D.C. as a full-time staff member for a congressional office or congressional committee.

“I wrote her the recommendation because I really believe in her, not to mention her extensive global health veterinary experience,” said Nicastro. “Deborah applied with the platform that she would spend her time advising Congress on the importance of One Health.”

Thomson was ultimately awarded the fellowship, which she started in September. She served in the office of Senator Dianne Feinstein.

“One Health is what keeps me up at night, so I know it’s worth doing,” said Thomson.

Perhaps it was on one of those late nights that Thomson decided to launch OneHealthLessons.com, her website devoted to bringing One Health lessons to children between ages 6 and 18. She is truly meeting the global need, one classroom at a time.

CABI Digital Library has announced the launch of a One Health Case Competition, rewarding the winning author teams for their outstanding contributions to the teaching of One Health. CABI One Health cases are real-life examples of One Health projects or research...

Operationalizing the Environment Health Nexus in Asia and the Pacific: A Policy Guide on Opportunities for Enhancing Health, Biodiversity, Food System and Climate Action aims to support policymakers and stakeholders in the Asia-Pacific region to address...

We are pleased to inform you that enrollment for two asynchronous online courses is now open. The courses described below are designed for completion by learners who aspire to acquire One Health competencies. The courses serve as continuing professional development...

Welcome to the One Health Workforce Academies course on virtual Communities of Practice. The concept of virtual ...
See More

Antimicrobial Resistance (AMR) in One Health